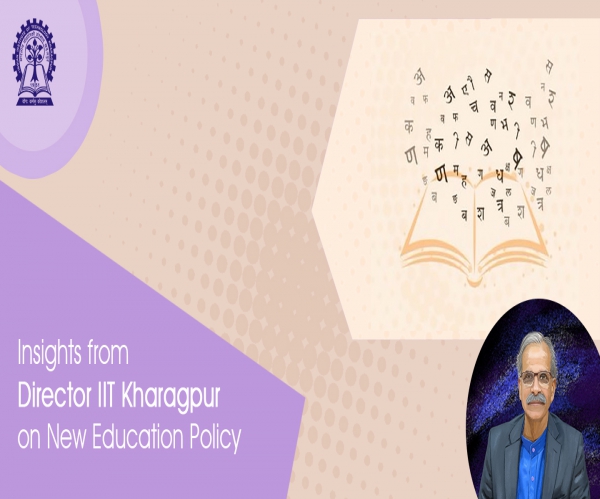 A day of celebration as an educationist as we welcome the National Education Policy (#NEP2020) announced by Dr.Ramesh Pokhriyal Nishank, Hon’ble Minister, Ministry of Human Resource Development, Government of India. The policy has substantial elements for the higher education sector. The key among them is setting up the National Research Foundation to foster research culture and removal of MPhil which has been witnessing a downward trend in offering research career opportunities hence fewer number of takers.

Emphasis on Interdisciplinary and Humanities Education at IITs

Another area I must mention is the thrust on multidisciplinary education including more of Humanities and Social Sciences at the IITs. While the older IITs have a strong presence in this sector, this would strengthen the holistic academic needs of new generation IITs. At IIT Kharagpur we are already offering microspecializations, micro-credits and research programs that are typically interdisciplinary. We have specialized centres in these areas, to name a few are the Rekhi Centre for Science of Happiness, the Academy for Classical and Folk Arts, our law school which is the first-of-its-kind focusing on Intellectual Property. We will be glad to work with new IITs in these areas.

What excited me most is the School Education Policy. It has come after almost four decades and with much democratization of pre-primary, primary and middle school education. The emphasis on primary education in regional languages and the introduction of Sanskrit, following the three-language formula, will turn out to be a great boon to the people of the country, especially in the rural areas. In several European universities, Sanskrit is being explored as a coveted academic discipline.

German universities have delved into Sanskrit learning to conduct research on the scientific heritage of the Vedas, Upanishads and other ancient Indian scriptures such as Baudh?yana s?tras (800 BCE) which contains mathematical principles of square roots, Pythagorean theorem, geometric principles etc. or Pingala’s misrau cha (400 BCE) which is usually identified as the Fibonacci number series and works on advanced Mathematics, Physics, Astronomy, Chemistry, Metallurgy and much more. India in this 21st century has still much left to look back and explore our hidden wealth. Endowing our student community with an evolved language like Sanskrit will help shape a rational thought process among school-going children.

The regional and Sanskrit language education will also enable our student community to grow strong indigenous roots and learn from the resources of our rich heritage while training in computer programming will upskill them to dive for more opportunities as the 21st century progresses.

Education through the National Digital Library of India

The National Digital Library of India developed by IIT Kharagpur as an initiative of MHRD has much to offer towards this new policy. It can give a significant impetus to pre-primary, primary, middle school and high school education through incorporating not only educational resources but also developing online education pedagogy and outreach programmes facilitating rural students. It can further provide resources for the education of the elderly to make them more equipped for Digital India.