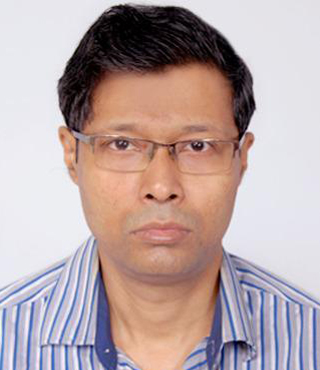 
My research contributions are primarily in the field of full-wave analysis and design of efficient antennas and guided systems, miniaturized antennas, numerical techniques, and metamaterials. We had shown that it is possible to realize a high radiated power gain from an electrically small antenna and an electrically small antenna array using a metamaterial shell of reasonable thickness, which was earlier reported to be one of the primary design constraints for practical realization. We have also designed and fabricated novel electrically small antennas with Q-factor very near the Chu-limit, together with highly miniaturized planar antenna configurations. In addition, we have successfully designed an efficient metamaterial-based superstrate for the significant performance enhancement of an electrically small antenna. We have also investigated new hybrid mode characteristics in a metamaterial loaded circular waveguide with a rigorous analysis of both isotropic and anisotropic metamaterial cases.
In addition, we had been also engaged in the research on the acceleration of the full-wave Green’s function based technique for the analysis of the dielectric resonator antenna (DRA), resulting in a very significant improvement in the computational speed by a factor of 100 compared to that in the literature. Our research group has also for the first time characterized the modes of the multilayer DRA with an arbitrary number of layers. We had also actively contributed to the efficient and full-wave analysis and design of the planar and non-planar feeds to the multilayer DRA, together with multiband/broadband DRA topologies.
We had also developed the full-wave analysis and design of a system of conformal loop antennas around a conducting cone considering mutual coupling. The impedance match and cross-pol characteristics were significantly improved due to the presence of the cone. A three-loop director-reflector structure based on the above configuration was also investigated.

Design and analysis of efficient antennas.

Design and analysis of efficient antennas